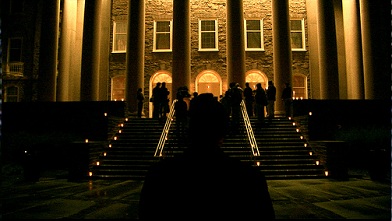 The model for the independently produced film Determinism isn’t unfamiliar: turf battle, racial firestorm, class-crossing love triangle, domineering kingpin, addled drug-runners. Part of what makes it different — more to the point, what makes it tick like a time bomb — is that all these things play out on a suburban college campus.

To some extent, that contrast between action and setting brings to mind Brick, which starred a pre-Inception (and, for that matter, pre-500 Days of Summer) Joseph Gordon-Levitt in what was essentially a film noir shot at a high school. What Brick played for deadpan meta-shtick, though, Determinism does with realism. While drug deals in dorm rooms are nothing new, the mingling in Determinism of homework and guns is palpable. This is a movie where returning to the straight and narrow after a drug-fueled walk on the side means hitting the books, though in a way that’s more “AA 12-Step” than it is “ABC After School Special.” 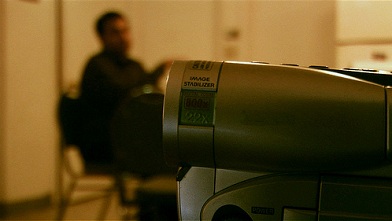 Adding to the interesting mix is the very nature of those racial identities. The film is the creation of twin South East Asian brothers Sanjit and Ranju Majumdar. Sanjit also edited it (and stars as its anti-heroic protagonist, Alec), and Ranju was its cinematographer. (There’s a bit of knowingness to the “filming within the film” in Determinism, which features Sanjit recording video diaries as he tries to extricate himself from family ties and school ties, and ends up digging himself a deeper and deeper hole of trouble.) 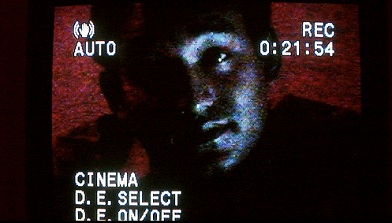 And, to top it off, Ranju also composed the Determinism score, which puts him in the small but elite category of filmmakers who contribute the music to their work, among them JJ Abrams, John Carpenter, Clint Eastwood, and Tom Twykker. That music is what really stuck with me after several viewings of the film, and I eventually suggested to Ranju that he post the score, which he has done (for free download) at soundcloud.com/determinism. (Full disclosure: A relative of mine was a producer on Determinism, and I saw its rough cuts at various stages of development.) One favorite cue of mine is the “Determinism Closing” theme, which is a characteristically haunting mix of drones, sonar beeps, field noise, and occasional percussion that is all dread, all anxiety.

And here’s the film’s promotional trailer:

More on the movie at determinismthemovie.com. Get the full score as a set of WAV files, or stream them, at soundcloud.com/determinism.