My Liner Notes to the New Landrecorder EP 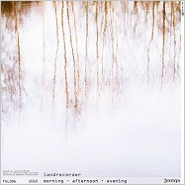 The Lisbon, Portugal, netlabel feedbacklooplabel.blogspot.com just released a great three-track set by Landrecorder, the British phonographer. FeedbackLoop proprietor Leonardo Rosado (aka twitter.com/sbtrmnl) invited me to write the mini-album’s liner notes, based on his sense that its mix of composed sound and field recordings would entice me. He was by no means mistaken, and he was patient as I took my time to work through Landrecorder’s narrative construction, based around phases of the waking day, as the album’s title, morning | afternoon | evening, suggests. Here is what I wrote:

Reportedly, that would be a music box, not an ice-cream truck, coasting into (aural) view early on during “Evening” — those tinkling notes immediately summoning up (mental) images of childhood, despite their objectively terse, metallic timbres. “Evening” is the third and final track of Landrecorder’s lovely, daylong, slo-mo odyssey. We know it is a music box because of some brief liner notes provided by Landrecorder, but without that insider information, we might not be entirely certain. This is because Landrecorder mixes field recordings and instrumentation in a way that artfully confuses any preconceived notions of scale. In that one track alone, we hear mournful piano chords, the delicately wound music box, and a variety of field noise, including birdsong and street sounds — often at the same time. By and large, Landrecorder’s approach is to maintain such sounds at the same relative volume level, and the result is that the piano and the music box, the avian calls and some random bristly disturbance, are all set alongside each other, like so many ducks in a row. Occasionally he modifies these sounds — there’s some backward masking on “Morning” that mimics the seep of a half-lost thought, and during “Evening” the piano at one point is echoed majestically — but his primary technique is deeply, and creatively, curatorial: combining unassociated sonic elements into something new. Landrecorder announces the importance of framing in his technique at the album’s outset, when “Morning” begins with an acoustic guitar part on repeat, as if a needle has been set down more than once at the same place on an old piece of vinyl. A similar sense of nostalgia is infused in all three tracks, from the mournful harmonica on “Morning” to the distant chatter of children on “Afternoon,” to the way the sound of a car driving past brings “Evening” (and, hence, the full set) to a close. This compositional technique mirrors the process of memory, things combined in unlikely combinations, and in unlikely proportions: sometimes warped, sometimes laid bare. And both approaches, in Landrecorder’s hands, lead to tantalizing results.

And, more importantly, you can listen to (and download, for free) morning | afternoon | evening here: