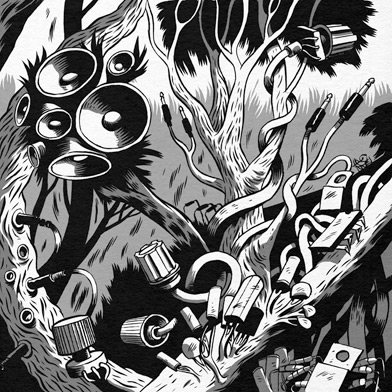 This is the fifth occurrence of a relatively new little Disquiet.com project, called “Sketches of Sound”: inviting illustrators to sketch something sound-related. I post the drawing as the background of my Twitter account, twitter.com/disquiet, and then share a bit of information about the illustrator back on Disquiet.com. Call it “curating Twitter.”

The above drawing was done for me for this project by Hannes Pasqualini, who lives in Bolzano, Italy. During the day, Pasqualini works as a communications designer. At night he thinks, writes, draws, and assembles noise into sonic sequences. His love for the unsettling, the macabre, and the absurd can be found in his comics and illustrations (which he has published in Italy and abroad, in books, anthologies, and magazines) and in his musical ramblings. What he likes most is to combine the two disciplines: as a comic artist he’s recently published a book about jazz in Italy during the ’50s, and he has created short comics and illustrations dedicated to acts like Pere Ubu, Bauhaus, and Soap&Skin.

Like a lot of visual artists, Pasqualini also makes music, and he describes his “Sketches of Sound” illustration as “a surreal representation of what I have on my studio desk.” Here, for reference, is a photo of his desk: 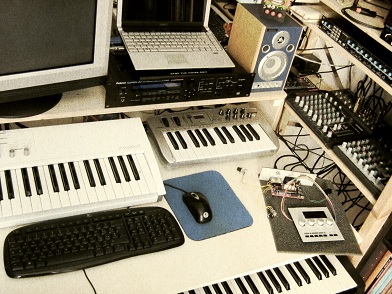 And here’s the video trailer (vimeo.com) for the comic Gietz!, which Pasqualini drew; it was written by Andrea Campanella and published by Tunué:

If you click through to Pasqualini’s vimeo.com channel, you’ll also see this circuit-bent music tool that he created by using a fan to modulate the sound of the Michael Una’s Beep-it optical theremin: