The news is circulating that Brian Eno‘s new full-length record will be released by the British label Warp. In many ways, Warp is itself the news — there’s much anticipation for any new Eno album, but especially so now that he’s aligned himself with the home of Aphex Twin, Autechre, Flying Lotus, Battles, and Prefuse 73, just to name a few of Warp’s roster who break new ground as a matter of course. This will be his first solo record in half a decade, since 2005’s Another Day on Earth, which was released by Hannibal. Small Craft on a Milk Sea, as the new album is titled, is due out November 2 in the U.S. and November 15 in the U.K.

Eno recording with Warp is like when Tom Waits or Merle Haggard signed with the label Anti-: a godfather joining up with a label whose very outlook on culture he’d helped inspire in the first place. Venturing into alternate history, it’s as if Miles Davis had switched from Columbia Records not to Warner Bros. but instead to ECM. The latter comparison is particularly apt, because of timing. Davis’ first record for Warner Bros. was the 1981 The Man with the Horn, released barely 20 years after the launch of ECM, which put out its first record in 1969. Warp was founded just over 20 years ago, in 1989.

We know what the new Eno album will look like, thanks to a series of promotional pushes from his new label, Warp. As is increasingly common in the record industry, various versions are coming: a limited-availability box set, a collector’s edition box set, a CD, and several digital-only downloads. Here are images of some of those editions: 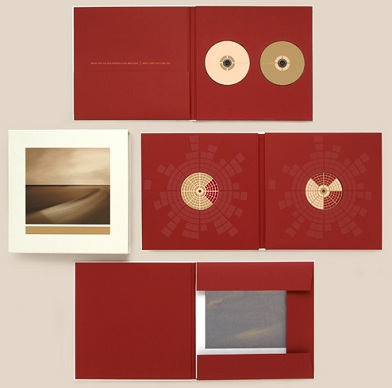 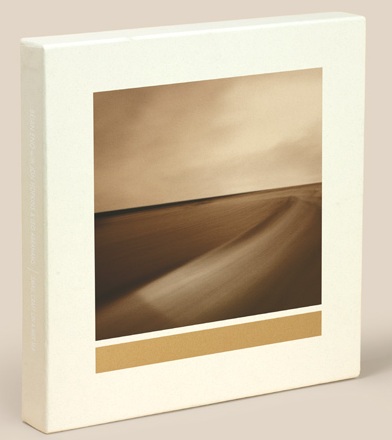 But what will it sound like? Some of the clearest indication is in its personnel. Small Craft on a Milk Sea is credited to Brian Eno, but also states “With Jon Hopkins and Leo Abrahams.” In fact, it was a mention on Abrahams’ blog that resulted in premature coverage at guardian.co.uk, a leak for which Abrahams later apologized. Both Hopkins and Abrahams have worked with Eno in the past, Hopkins on the score to The Lovely Bones, the Peter Jackson film, and Abrahams in a variety of capacities (he appears on such albums as Everything That Happens Will Happen Today, Another Day on Earth, and Surprise, the Eno-produced Paul Simon project). Eno guested on Abrahams’ The Unrest Cure.

Hopkins and Abrahams have numerous mutual associations beyond Eno. Both are alumni of David Holmes projects. Holmes remixed Hopkins’ “Light Through the Veins” last year. Abrahams played on Holmes’ scores to Oceans 12 and Code 46 (the latter is especially under-appreciated, and I recommend it highly). Abrahams’ Scene Memory is an EP of remixes, featuring Hopkins and Holmes, as well as Eno associates Roedelius, J Peter Schwalm, and Jan Linton. Hopkins also contributed a remix to Abrahams’ EP1, a follow-up to the Abrahams album Honeytrap. Abrahams played on Hopkins’ Opalescent.

All of which is to say, Hopkins and Abrahams bring not only experience with Eno to Small Craft, but also a considerable amount of mutual experience, which should provide meaningful cohesion. (Anyone who read Geeta Dayal‘s recent book on Eno, Another Green World, was reminded that it isn’t unheard of for Eno to throw together musicians who have little prior experience working with each other.) Both Hopkins and Abrahams emphasize a certain unemphatic approach, often beat-driven, but still background-able, ambient music with a populist sensibility. Abrahams is a guitarist, and guitar is often discernible in his work.

In May of last year, rcrdlbl.com posted this free download of the Hopkins gently upbeat instrumental track “Wire,” off his solo album Insides:

Neither Hopkins nor Abrahams have much in the way of free (legal) downloadable music online, but there is a lot of streaming audio: Hopkins at jonhopkins.co.uk, myspace.com/jonhopkins, dominorecordco.com, and soundcloud.com/jonhopkins; Abrahams at leoabrahams.com, myspace.com/leoabrahams, and last.fm/music.

And here, in closing (via createdigitalmusic.com), is video of Eno in performance with both Hopkins and Abrahams, along with Karl Hyde (of Underworld) and the Necks, on Sunday, June 14, of last year at the Sydney Opera House:

More on Brian Eno’s forthcoming album Small Craft on a Milk Sea at brian-eno.net and warp.net.