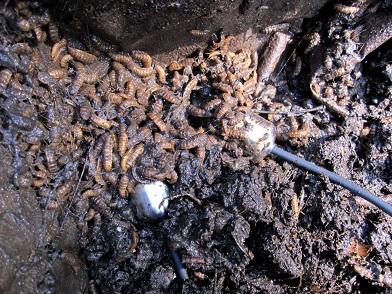 It’s not every field recording of maggots that gets 500 listens and more than a dozen comments in less than a day over at soundcloud.com, but the popularity of Richard Devine‘s track (“Hydrophone/Lav Recording of 1000 Maggots in sticky wet mud”) has the benefit of Devine’s significant track record, as both a musician, and a prominent ambient-Twitter figure (over at twitter.com/richarddevine).


The photo above accompanies the track, about which Devine provides the following details: “Recording today of a container full of thousands of Maggots squirming in wet mud. I buried two H2a-XLR hydrophones below the surface (in the mud), and placed two DPA-4060 Lav microphones on the top surface and let the maggots call all over the place. All 4 channels are unprocessed, unedited 24bit-96khz captured with a Sound Devices recorder.” Among the commenters is fellow musician (and Twitter figure) Scanner (aka Robin Rimbaud), who said, “Obscenely pleasing, though really you could be just recording your fried breakfast :-)”

This is the first Soundcloud.com entry I’ve mentioned on Disquiet.com since that site, in mid-August, added linkable tags to its impressively tidy interface. As of now, there’s only one item (Devine’s) at soundcloud.com/tags/maggots, though that’s sure to change.

More on Devine at richard-devine.com.