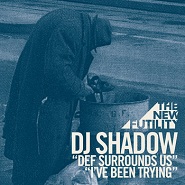 Time-sensitive free downloads are the new remix contest, the new ubiquitous promotional opportunity. So it was no surprise when an email arrived from djshadow.com offering a pair of free MP3s, albeit only for 24 hours. For several years now, the email missives from DJ Shadow‘s website have been increasingly commercial in intent and content — they’re more likely to be about hoodies than music. So, this free offer was a doubly positive occurrence, even if Shadow’s website for half of today proved to be overburdened by the popularity of the offer. As it turns out, the files aren’t even hosted at djshadow.com — they’re over at djshadow.bandcamp.com, where in exchange for your email address, you’ll get a Zip file containing two songs, “I’ve Been Trying” and “Def Surrounds Us,” both reportedly off his 2011 album, which currently lacks a title.

The site describes “Def Surrounds Us” as “electro/dubstep/dnb-inspired epic” — and while there remains something a bit awkward about the adoption of the word “dubstep” by musicians, such as Shadow, whose body of work preceded its existence, the use isn’t mistaken here. It’s a heavy, lengthy (almost eight minutes) pop-like track that ultimately, fortunately, is more about collage than it is about song. Its title is a playful mishearing of a bit of found audio with which it opens (“Though we are alive, death surrounds us”), and it proceeds like a beat-intensive suite, from synth handclaps that bring to mind early hip-hop, to video-game triumphalism, to tribal headiness, to a quasi-Gregorian section that suggests what the Enigma catalog will sound like when it’s inevitably resuscitated for a post-Burial/Shackleton audience. What the track may lack in the gloriously messy confusion of Shadow’s early work, it makes up for cinematic narrative surprise.

One note: The timing of the release puts “Def Surrounds Us” right smack in the middle of news that the site where the sounds reside, bandcamp.com, will soon begin charging for free downloads — which is to say, Bandcamp will start charging musicians for the opportunity to post free downloads. The news is not entirely surprising (hosting costs money), but it has hit the netlabel community hard, because many labels have been using Bandcamp to host their catalogs. Likely many of them will be moving to archive.org as a result.