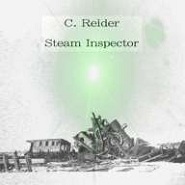 C. Reider has recorded steampunk music, minus the punk — a single-track release of what he describes as “drones, drummachines and recorded sound” that has all the ambience of a dank tunnel and all the composure of a tape-music event, or perhaps it’s the other way around (MP3). Reider is a prolific and deeply curious (and curiosity-inducing) musician, some of whose most intriguing work involves employing drum machines for purposes other than beats. He announced the track’s availability via twitter.com/vuzhmusic last week. In it, recognizable pneumatic pounding shares space with insectoid chatter, whizzing burry sine waves, and sinuous droning. Any one of those items might, in fact, be sourced from the drum machines in question, but there’s even money that in fact it’s the least likely element — quite likely, it’s those drones that are, in fact, some standard issue drum machine tweaked far from its factory-preset comfort zone.

If the title summons up some Hayao Miyazaki vision of a homunculoid cartoon character making its way through a realm equal parts fantasy and dessication, you aren’t far off.

More on Reider at vuzhmusic.com.