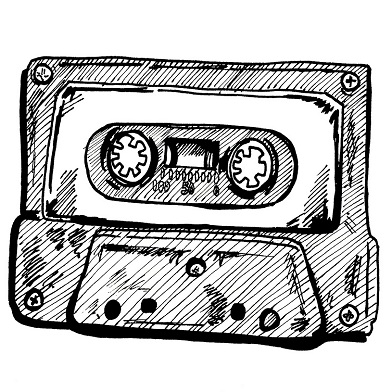 This is the sixth occurrence of a little Disquiet.com project called “Sketches of Sound”: inviting illustrators to sketch something sound-related. I post the drawing as the background of my Twitter account, twitter.com/disquiet, and then share a bit of information about the illustrator back on Disquiet.com. Call it “curating Twitter.”

The above drawing was done for me for this project by Thorsten Sideb0ard, who is possibly slightly more well known for his London-based electronic music label, Highpoint Lowlife. He has been scribbling on paper for many years, from club flyers to album artwork, with the occasional self-published comic. Over the past year, he has been devoting more and more time to drawing, uploading content regularly to his blog at drawingb0ard.blogspot.com, where you can see sketches, works in progress, and older material that has been found and scanned. This year he decided to lay the label to rest and concentrate on his illustration, and has started in earnest on a comic project entitled Physic or Surgery which is set in a near future post-industrial city, covering the interactions and lives of the cities many inhabitants.

In interviewed Sideb0ard back in 2003 (“Behind the 8-bit”), and he explained how the label he’d founded was inspired less by indies like Def Jam and Matador, and more by a computer database:

“I had just started working at a company who specialize in content-managed websites within the music industry, usually for small independent labels (the company is called State51), and they have this really cool database system for adding and manipulating content. I’m the system and network administrator for them, which is something I have done for years. However, I hadn’t done too much Perl coding, nor database work. So 8bitrecs.com started almost as a pet project to get up to speed with how a lot of their systems work, like a much smaller version.”