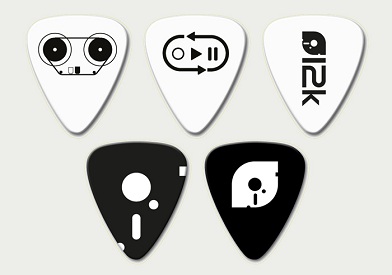 They were produced recently by the 12k label, whose logo adorns the one in the upper right corner. Continuing counter-clockwise, another features the icon from that logo, itself derived from the 5¼ inch floppy disk of days gone by. A third is a closeup of the data-accessible regions of the floppy, and (in the upper right corner of the pick) the write-protection tab. Those three were designed by the 12k label’s owner, musician Taylor Deupree, who is also a talented photographer.

The other two picks were designed by Marcus Fischer, whose music is a frequent presence on this site. One (continuing counter-clockwise) shows a tape-loop machine, and the final one shows the standard digital-audio controls (“record, play, pause and repeat,” as Fischer lists them on his site, unrecnow.com). I initially mistook the tape-loop picture for a boombox, when it was reproduced at a small size. Fischer has a particular interest in the intersection of design and tape loops, having produced a lovely cassette-loop device whose image was widely circulated after he made it public in March of this year (see: disquiet.com).

On first glance, it’s potentially tempting for some to mistake these items as a collective pun. The 12k label traffics largely in music that would be called “electronic,” so the idea of a pick, let alone one emblazoned with tape-loop machines and ancient digital-data devices, suggests a certain amount of ironic distance. But the opposite is the case. For one thing, the tape-loop machine taps into the tradition associated with Robert Fripp of live sonic layering (on Twitter.com, @compactrobot tweeted “Frippertronics!” a minute after @taylordeupree admonished me for my boombox misreading). For another, a lot of 12k artists, notably Christopher Willits, use the guitar as one of their primary instruments. The label released its guitronic collection EADGBE (featuring Willits, along with Fonica, Keith Fullerton Whitman, and Sébastian Roux) back in 2003. Fischer is currently finishing an album for 12k.

The picks are available as a set in the 12k.com store, filed under “Objects.”

One thought on “These Guitar Picks Kill Genre Isolationists”