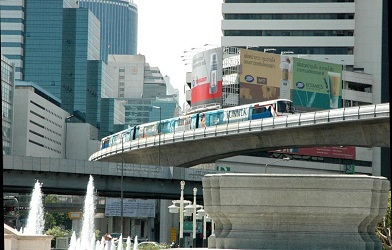 Urbanologists and field-recording enthusiasts alike will appreciate the third episode of Ben Tausig‘s “Bangkok Is Ringing” series, part of the ongoing podcast from canopycanopycanopy.com (aka Triple Canopy). The episode (MP3) peers up above the city’s impoverished streets to a space reserved for those who can afford it, a space distinguished in large part by how it shields its customers from the noise of everyday life. That space is the Skytrain, pictured here.

Tausig describes the “Rising” series as “exploring the politics of urban sound in Bangkok and beyond, through first-person reporting, field recordings, and analysis.” The documentary audio in episode three focuses on nine rapid beats, which signify that the doors of the Skytrain are closing, after which, as Tausig describes it, “a deeper silence sets in.” The entry emphasizes the class differences between those who can and cannot afford passage, a passage, as he puts it, “sealed from the street’s eternal drone.”

Of course, there is no such thing a true silence — one range of noises is exchanged for another, and the Skytrain indeed has its own soundscape, marked by “mild music” and polite chatter. Descriptive explanatory text and interviews (there’s a particularly memorably moment when his recording device is mistaken for a Nintendo Game Boy) mingle with original field recordings of the city and its elevated transportation system for a compelling portrait-in-audio of Bangkok in transition.

Tausig, a PhD student in ethnomusicology at NYU, blogs at weirdvibrations.com, where he expands on the theme of the piece, writing of the experience of Bangkok’s citizens:

They want to shop and work in spaces parallel to those that have been overrun, where sensation has become for them overwhelming. So new channels are carved. The city becomes sedimented, with layers corresponding to something like class. Money, or lack of it, enforces access to these layers, but so do composure and habit.

Skytrain image, above, from wikimedia.org. Street-level image below by Tausig: 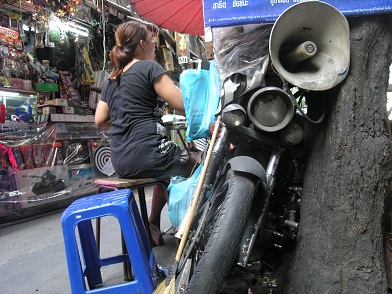