Repetition as a Cultural Force (MP3s) 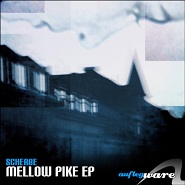 The despondent techno of Sherbe‘s excellent EP Mellow Pike provides a pithy manifesto with the title of its second track, “Repetition as a Cultural Force” (MP3). Repetition is inherent in techno, as beats shift ever so slightly — it’s music less as a melodic or harmonic development than as an atmospheric array of elements. In this central track, snippets of a vocal edge in from the start, clipped just shy of being intelligible, and remaining in that static state until, midway through, there’s a break and the sentence is heard in full.

Voices bring so much texture to a track, it’s only by breaking a syllable that Sherbe can force the voice into the overall structure, a structure built from slurred beats that move like tectonic ruptures. Another highlight is “But Loisy,” the EP’s closing track, which opens with a fuzzy circuit of sound, live wires looking for a ground, before a hiccup beat kicks in to lend tempo (MP3).

Slowly the piece is fleshed out, eventually employing a cymbal, but one that has very little attack; it’s all shimmering gloss. Repetition may be a cultural force, but if repetition is a form of change, then Mellow Pike is an example of a musician moving things forward.

Full release of three tracks at the netlabel auflegware.de.