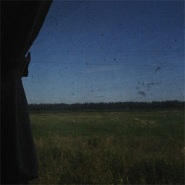 Drone music draws as easily and commonly from natural sounds as it does from electronic ones, just as it does from noise and from traditional instrumentation, often intertwining the seemingly disparate elements. The cello drone in electronic music can trace its roots at least as far back as David Darling and Hank Roberts, two musicians who used electronic effects to expand their instruments — “expand” in the sense that it is sometimes applied to cinema, a mode now associated closely with ZoÃ« Keating and Ted (Oo-Ray) Laderas, among others.

The drones of Peregrino, aka MuÃ±iz, Argentina’s Bernardo Durand, aren’t necessarily rooted in the cello, but they are frequently rooted in deep, reverberant strings that could pass for a cello in a dark alley. The intonations may get lost in the blissed-out murk of “En la vieja cabaÃ±a, la ventana clausurada,” the third track off his recent netlabel release, El azul helado del albal, but elsewhere on the record they are prominent, especially in the album’s opening track and keeper, “En una habitaciÃ³n oscura” (MP3).

The strings make themselves heard shortly after the outset, following which they’re balanced by a rich molasses of sound (the “murk” mentioned above, lovingly), and by bell-like tones that seem to shudder in slow motion. It’s fascinating to take a step back from the track, which is entrancing enough to get lost in, and recognize how those strings seem to pierce the surrounding audio as they arise, as if their sound is too complicated, too rich and singular, to be fully subsumed.

Durand runs the bilingual netlabel ahoraeterno.com.ar from Buenos Aires. It appears, based on an entry from the label’s blog, ahoraeternorecs.blogspot.com, that the cover to El azul helado del albal, shown up top, was photographed on a recent train trip.