Â¶ Boot Down: Here’s a collection of boot sounds of various computers, including the Apple IIc and Window 3.1: titan08.free.fr (found via @tariqkrim). Sadly, I don’t see my old TRS-80 in there, and I have no recollection of what it sounded like. For what it’s worth, on my two current Windows 7 machines, I use a piece of shareware called Auto Mute (auto-mute.com), which turns off the sound of a computer during the boot sequence, so there is no audible boot, and the machine remains muted until you choose to un-mute it. I have a Sony television at home, and it makes a loud tone, a kind of synthesized bell, when it is turned on — if I set it to mute when I turn it off, it recalls that it is muted when it’s turned back on, but does so about halfway through the turning-on process, so the boot/on bell tone is heard, but truncated. If a piece of consumer electronics can be embarrassed, this is the sound that it makes.

Â¶ Phoner?: Image of a phone (the DP01 Dect) for which Scanner (aka Robin Rimbaud) designed all the sounds. According to the product’s features page (punktgroup.com) there are 10 of these sounds, all of which are streamable from the site: “active,” “airwaves,” “chitter,” “connect,” “contact,” “mirror,” “motion,” “relay,” “vive,” and “wired.” 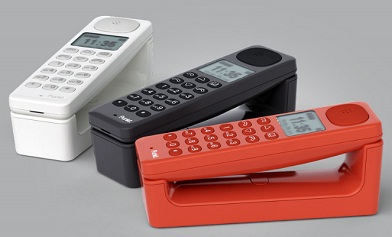 Conversation Instrumentals: The DP01 Dect phone, with sounds by Scanner

Â¶ A Decade Screwed: DJ/rupture, aka Jace Clayton, reflects on the impact of Robert Earl Davis, Jr., aka DJ Screw, a decade after his passing (at frieze.com):

Not all songs sound good screwed; the technique reveals a hidden face whose image can’t be guessed beforehand. The effect is druggy ”“ there’s a subculture of codeine-based prescription cough syrup around screw ”“ and occult. Once screwed, upbeat songs in a major key destabilize into eerie tonalities. Dark tunes get darker. The bass goes viscous. A screwed song urges the listener to internalize its dampened tempo, to stretch the existential qualities of the moment to match the music.

Â¶ Insert Holy Grail Pun Here: Via Alexis Madrigal (@alexismadrigal, via @andrewhazlett), who has been on the hunt for early recorded sound, audio from Mecca dated 1885. You read that right, 1885: cnn.com.

These sounds from Mecca were recorded by Dutch adventurer Christiaan Snouck Hurgronje a quarter century after what are generally considered the oldest known recorded sounds, those of Ã‰douard-Léon Scott de Martinville (more at firstsounds.org/sounds). Thomas Edison‘s phonograph, the cylinder recorder, for historical comparison, dates from 1877. It seems that the further we get into the future, the more the past comes into focus — and the more that it makes itself heard.