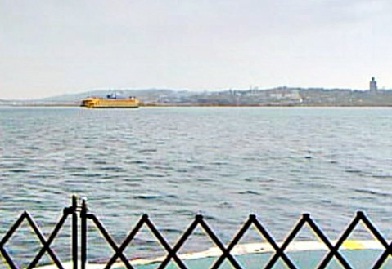 Sound artist John Kannenberg has remastered one of his most touching recordings, a tribute to the late monologuist Spalding Gray. The audio takes recordings made in 2003 on New York City’s Staten Island Ferry and transforms them into a lament for its troubled subject. The Ferry is associated with Gray because it is reportedly the last place he was sighted before disappearing; later, his body was discovered in the East River.

At nearly 20 minutes, it mixes a wide variety of sounds, including what could be highly processed bird song, the rumble of the ferry’s motor, and ringing bells. This is no simple elegy. For all its surface placidity, it is shot through with high-pitched sounds that edge toward anxiety. It also has a uniquely melodic component for a work, such as this, derived from field recordings. Especially after its midpoint, there comes to be heard a light melody, an eerie riff that resembles some of the more otherworldly recordings of Louis and Bebe Baron.

One thing to note is the dates. Gray died in 2004, and the recording was produced and released shortly thereafter (originally on Earlabs; this version was remastered this year). But the recordings of the ferry were completed by Kannenberg in 2003. Which means he had in his possession sounds that meant one thing before Gray’s death, and something else entirely after. Even without the sonic transformations inherent in Kannenberg’s processing, the association of Gray with the ferry gave those recordings new meaning after his tragic suicide. That simple gap in dates lends even more gravitas to the recording. Music built from field recordings is intended to, in some way, reflect our world back at us, slightly altered, and thus illuminate it in a special way. Since the ferry audio was transformed (in terms of meaning) simply by the fact of Gray’s passing, the piece casts a shadow on all field recordings, exemplifying how even raw documentation will change as context changes over time.

(View of Staten Island from the ferry in 1998 from flickr.com by Gregory Melle. Used via Creative Commons.)