Best Acoustic Techno of the Year (Bad Plus Interview) 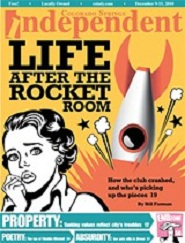 The Bad Plus — the jazz trio best known for its covers of Black Sabbath and Vangelis, not to mention György Ligeti and Igor Stravinsky — is the rare jazz band that functions like a rock band. That’s what I focused on when interviewing Ethan Iverson, the group’s pianist, for a short piece recently. It’s available at csindy.com. The title track of the new Bad Plus album, Never Stop, may be the best electricity-free techno ever (a category that could do with more material). It was composed by the group’s bassist, Reid Anderson. It’s the band’s first album ever with no covers; it’s all originals by the band members (drummer David King, in addition to Iverson and Anderson). The editor gave my interview a great title: “Compose Yourself.”

And here are a few things that didn’t make the printed interview, due to length:

Â¶ The “Never Stop” song was written for an Isaac Mizrahi fashion show.

Â¶ Asked if he’d ever tried augmenting his piano electronically (in addition to the band’s interest in Aphex Twin, and the techno-ness of “Never Stop,” Iverson has played with digi-celllist Hank Roberts), Iverson said, “Reid works on electronica every day but I don’t know much about it. I just play the piano.”

Â¶ There are no current plans for remixes. Said Iverson, “What a nice idea — no plans yet, but you never know.”