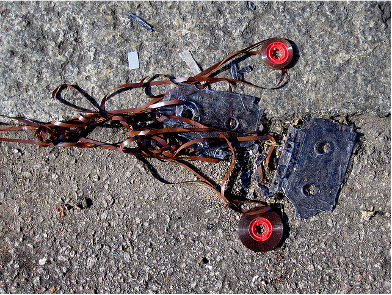 Back in 2002, Douglas Coupland published a short book that marked his own awakening sense of nationalism — an awakening that he suggests his home country as a whole, Canada, was itself still going through. Souvenir of Canada is a mix of mini-essays and photos, all documenting cultural objects that Coupland deems as inherently Canadian, from the empty vinegar bottle that appears on the book’s back cover to the packaged goods, publications, and apparel that figure in his striking still-life photographs.

In any case, in the process of describing the social and cultural implications of the Trans-Canada Highway, Coupland recounts how in 1979 he and a friend ventured to drive a car from Vancouver to Toronto:

I don’t know what we were thinking, because there was only one tape in the car (the Allan Parsons Project’s Pyramid), which was icily tripped out of its plastic casing and unwound across the Trans-Canada Highway just east of Calgary. Before that, I used to wonder why people left long strands of brown cassette tape on the freeway, and that was how I learned the answer: it is the psyche’s defence mechanism kicking into place in an effort to stave off distance-induced madness. They’re long skinny screams. They are haikus of the void.

This having been 2002, today’s cassette-culture retro movement — marked by cultural appropriation of the image, and also by the emergence of new cassette-only record labels — was almost a decade away. But Coupland’s observation isn’t valuable for its prescience. It’s valuable because of how he finds a particular emotional meaning in the physical object of a cassette tape. A broken cassette tape is different than a broken compact disc is different than a broken vinyl record. 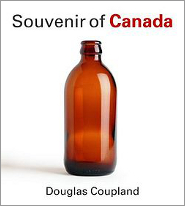 The surface noise and scratches of vinyl are inherent factors in turntablism and hip-hop, and so-called glitch music was founded on the random-access skipping of CDs. The boombox has certainly staked its place, and it’s a place distinctly apart from the cassette tape, even though most boomboxes were cassette players. As for the decayed cassette tape, it has yet to fully find its own specific sonic niche (though from a visual perspective, Christian Marclay and others have mined it richly). In describing his sense of Canada’s emerging self-identity, Coupland manages to also hint at the self-identity of the cassette.

It’s also the funniest cassette-tape passage since 1990, when in the collaborative novel Good Omens, its authors, Terry Pratchett and Neil Gaiman, noted that any cassette tape left in a car for too long turns into a copy of Queen’s Greatest Hits.

(Above image of cassette from flickr.com courtesy of Moff, aka Mathew Wilson, and the Creative Commons.)