The Performance of Everyday Industry (MP3) 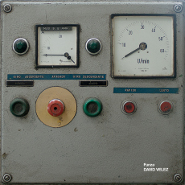 David Velez recognizes the sense of performance inherent in everyday life. He’s in particular interested in the performance that is part and parcel of repetitive tasks, a matter that isn’t necessarily something its enactors are even conscious of. Velez recently released a musically enlivened field recording of “industrial processes” via the impulsivehabitat.com netlabel. Titled Funza, it is a 40-plus-minute exploration of ordinariness, an ordinariness that is lightly augmented with musical tones, much like a documentary film that has a proper score and that occasionally implements editing techniques rooted in fictional drama (MP3).

Writes Velez of his undertaking:

Part of my job involves taking photographs of industrial processes to illustrate a series of manuals with production instructions and guidelines that the company gives to the machine operators. Parallel to taking the photographs. I capture the sounds from those processes most of them involving steam and pneumatic powered machines whose sonorities I found quite interesting for their percussive nature and their high pitched textures respectively. These recordings reveal an interesting obvious and irrelevant phenomena that captures my interest: parallel to making a product, the operator is performing a sound score using the machines as instruments. The operator is unadvisedly reading and performing a score unadvisedly written and encoded in the instructions and guidelines. While aware of “a performance” I advisedly record it.