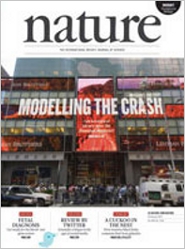 The new issue of Nature, dated today, January 20, 2011, features a dual-book review I wrote. (That’s issue 469 of Nature, which has been around since the tail end of 1869.) The books are Special Sound: The Creation and Legacy of the BBC Radiophonic Workshop (Oxford) by Louis Niebur and Begin Again: A Biography of John Cage (Knopf) by Kenneth Silverman. Unfortunately, the piece, titled “Music: Pioneers of Sound,” at nature.com is behind a subscriber paywall, but the gist of the review is as follows: both Cage and the BBC Radiophonic were maverick institutions in experimental music, both met their ends during the same decade, and both came to those ends (Cage in 1992, the Radiophonic in 1998) to some extent as an unfortunate consequence of their own expanding notoriety.

Yet despite their similarities, their paths rarely crossed. Cage was, for all his own open-mindedness, a figure in the living pantheon of the mid-century avant-garde, whereas the BBC Radiophonic was by its very charter determined to be populist — a goal more than achieved with its indelible theme song for Doctor Who.

Ironically, the books are the opposites of their subjects: Silverman’s is very much a general-reader survey of a great man’s life and career, whereas the BBC book is an academic inquiry enacted by a professor of musicology. That said, don’t let the latter’s occasional deep dive into tonal analysis scare you off; its real achievement is how Niebur charts the manner in which the Radiophonic navigated the cutthroat bureaucracy of the BBC. Fun fact: The BBC Radiophonic Workshop was not spun out of the BBC Music Department; the Radiophonic owes its existence to the shepherding of the Features and Drama departments. “Every good story needs a villain,” writes Niebur, “and here the Music department fills the role admirably.”

Between Silverman’s biography, the Kyle Gann book on 4’33” (No Such Thing a Silence, Yale), and the year-end Cage Against the Machine cause célÃ¨bre in England, 2010 was a pretty great year for his ongoing legacy. Oh, and my favorite sentence from Silverman’s fairly declarative telling of Cage’s life is this one: “Only five feet two inches tall, he was deemed the greatest living authority on the history of Alaska.” He’s describing the father of Cage’s one-time wife, the striking Xenia Kashevaroff.

And again, if you have subscription access, the piece is at nature.com.