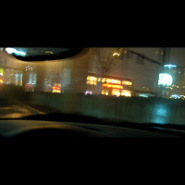 The electronically enabled cellist Ted Laderas recently posted a brief (three-minute) recording of an original composition that makes people who love his music hope he personally has a dreadful year. That’s intended entirely in jest, but it’s stated in light of the comment that accompanied the piece, titled “A Savage Exposition,” at his 15people.net website. He wrote: “I have been feeling a little depressed about my art as of late, so here’s a depressing little ditty for piano and cello.”

It’s a gem of a piece: compact, tight, classically refined, illuminated from within. The cello on “Savage Exhibition” has less of the artfully claustrophobic gaseous-effect shoegazer aura that is characteristic of Laderas’ work. Here he pairs the rhythmic cello with a simple piano line, one that is equal parts percussive and melodic. Together in combination, they suggest one of Philip Glass’ early chamber pieces intended for a dance performance. The sense of compactness comes from its limited motion, from the way it seems to move in place.

More on Laderas (for whose album Magnifications on the Luvsound label I wrote the liner notes) at 15people.net and soundcloud.com/ooray, “Oo-Ray” being Laderas’ name for his digitally enhanced cello work.