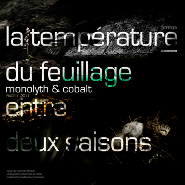 Drones may strike at the heart of music as we traditionally know it: threatening the notoriety of melody, putting unheard of weight on our expectations for harmony, creating a sense of rhythm that is somehow entirely devoid of a percussive impulse. And yet traditional instrumentation is often one of the most rewarding places to experience a drone. Cellos in particular have made headway, thanks to digital processing. The ebow long ago gave the guitar access to a kind of perpetual emanation. Numerous recent experiments in slowed sound have explored the angelic hidden in everyday pop. Monolyth and Cobalt, on its recent La température du feuillage entre deux saisons, has a track that uses the string quartet as a starting point (MP3).

The track, titled “Strings Quartet,” is less a drone than a drone-in-progress, a drone-in-the-making. It’s all carefully defined string parts, enticing in their simplicity, slowly overlapping, slowing ceasing to be individual, slowly creating a singular drone, but also, in time, being either supplanted by or digitally transformed into a far more artificial tone. But what makes it special is how the classical sense of form is never dispensed with, only enacted with increasingly unfamiliar sounds, either hyperreal, in the form of these exceedingly minimalist strings, or synthetic, in the form of unidentifiable source material (either computer-generated, or modified by effects).

More on the work at feedbacklooplabel.blogspot.com. More on Monolyth and Cobalt (which is, despite the apparent plural, one person: French musician Mathias Van Eecloo) at monolyth-cobalt.com.