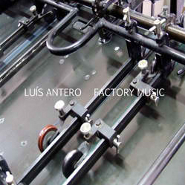 If John Muir was the proto-phonographer of nature, the model of a writer who strives to capture the world of sound with his words, he arguably had his equal in a fellow activist several decades his junior whose professional life overlapped with his own. Upton Sinclar, in The Jungle, among other works of creative muckracking, proved himself Muir’s match, the distinction being that Sinclair was an industrial mouse to Muir’s pastoral mouse. Muir is likely more often cited because descriptions of verdant national parks make better yearbook epigraphs than does reportage from slaughterhouse killing floors. But there is no less poetry, no less insight, to Sinclair’s ear. By way of example, this is from an early scene in The Jungle:

Then the party became aware of another strange thing. This, too, like the odor, was a thing elemental; it was a sound, a sound made up of ten thousand little sounds. You scarcely noticed it at first — it sunk into your consciousness, a vague disturbance, a trouble. It was like the murmuring of the bees in the spring, the whisperings of the forest; it suggested endless activity, the rumblings of a world in motion. It was only by an effort that one could realize that it was made by animals, that it was the distant lowing of ten thousand cattle, the distant grunting of ten thousand swine.

The passage came to mind while listening, on repeat, to LuÃ­s Antero‘s Factory Music, a half hour of recordings made in a factory town in Portugal (MP3). The sound quality is high, and the range of captured audio is remarkable for the distinction and variety.

These are some favorite moments: