A Look Back in Advance of the Latest from Colorlist 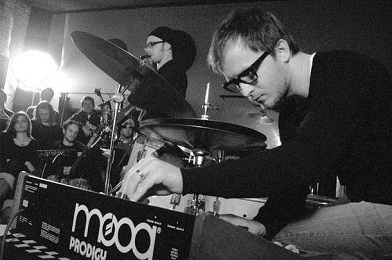 Come April 5, the Chicago-based duo Colorlist will release The Fastest Way to Become the Ocean, an EP, on the Serein label. As a preamble to that collection, Serein has compiled a single-MP3 “forecast,” collecting tracks from previous releases, seven in all (MP3). It’s a sinuous showcase for what makes Colorlist exceptional.

The duo is comprised of two Charleses: Rumback (drums, synths, electronics) and Gorczynski (saxophones, harmonium, Monome), the latter of whom will be familiar to readers of this site from his participation on the excellent Spinach Prince album (“The Continuing Feedback Loop Between Jazz & Hip-Hop,” March 22, 2010). They emphasize a discerning quietude, layering rhythms, warping acoustic sounds with digital effects, the horn echoed until it become a choral section, the decidedly limited percussion gaining the appearance of semi-automation.