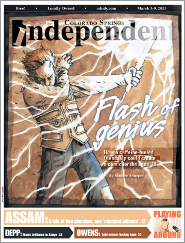 Thicket app co-developer Morgan Packard currently lives in Denver, Colorado, and a local alternative weekly for which I do some writing, the Colorado Springs Independent, picked up my interview (“Being Decimal: The Anticipatory Pleasures of the Thicket App”) with him. The app is his co-creation with Joshue Ott. The new version has a different introduction and has been trimmed for a more general audience, and it includes some additional information about the local community he’s found in the area, having moved there from New York with his wife. Packard focuses on the Communikey Festival (communikey.us), to be held next month and at which Monolake, William Basinksi, and Radere (Carl Ritger), among others, many from Colorado, will be performing. Read the piece (“There’s a Thicket for That”) at csindy.com.