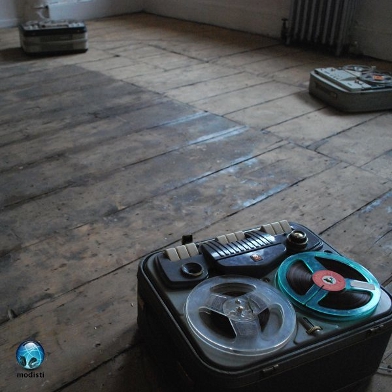 There is much that Google has yet to google. Just as for every book in Google Books there are countless personal handwritten journals moldering in attics, so too for every MP3 are there countless home recordings.

The ephemera that resulted from the novelty of recording, of hearing one’s voice, of emulating recording artists — not as karaoke, but simply through the modest yet powerful act of having committed one’s voice to tape — is the subject of “Untitled,” a piece of sound art by Graham Dunning from 2010 (MP3):

The recording is a composed collection of sounds from discarded reel-to-reel tapes dating from the 1950s to the 1970s: people singing nursery rhymes and popular songs alongside hiss, hum and crackle from the analogue recording process. The installation features three tape machines paying these disembodied sounds, calling into question the function of archiving and the relationships between sound, memory, loss and nostalgia. ‘Untitled’ was first exhibited in April 2010 at ‘Lost Language’ at Kraak gallery in Manchester, UK, and most recently at ‘Time Pieces’ at the Peter Scott Gallery at Lancaster Institute for the Contemporary Arts in March 2011.

It consists of two sounds: voices and technology. Lyrics are sung with a masked bravado, and then people are heard joshing each other about their undertaking, their affect, their talent, or purported lack thereof. The technology is all surface noise and rusty machinery, the deep sonic thumb print of a far less frictionless era than our current one.

More on the work at the releasing netlabel, modisti.com.