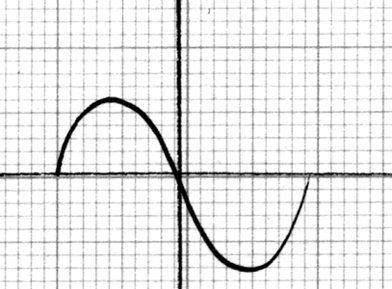 Every month for the past year, Disquiet.com has hosted a project called “Sketches of Sound,” in which illustrators are invited to draw a sound-related object. I post the drawing as the background of my Twitter account, twitter.com/disquiet, and then share a bit of information about the illustrator back on Disquiet.com. Call it “curating Twitter.”

For the 12th entry, Gustavo Alberto Garcia Vaca, who is based in Los Angeles, California, drew perhaps the simplest object of sound that he or I could imagine: a sine wave.

He will debut a new zine, titled Pasithea, at WonderCon the weekend of April 2 in San Francisco. Pasithea will feature a dystopian short story and artwork inspired by Edgar Allan Poe’s “The Raven,” “The Raven” illustrations by Gustave Dore, Los Caprichos and Los Disparates print series by Goya, Japanese yokai paintings, and Gothic ornamentation.

Gustavo Alberto Garcia Vaca is a writer/visual artist whose work is published in various books and literary anthologies, including Graffiti World: Street Art From Five Continents (Abrams Books), Reproduce and Revolt (Soft Skull Press) and Typography 30 (Collins Design). He also created a comic/manga for Wax Poetics Japan magazine. His artwork is exhibited in art galleries and museums including the Institute of Contemporary Arts (ICA) in London, UK; Los Angeles County Museum of Art (LACMA) and graffiti/street art gallery Crewest, both in Los Angeles, California; and Parco Museum and the Museum of Emerging Science and Innovation, both in Tokyo, Japan. In Japan, he has created artwork for projects with Medicom/[email protected], Beams T, abahouse, and SOPHNET. He also collaborates visually with Detroit Techno record labels Los Hermanos and Jeff Mills’ Axis Records; Francois K’s Deep Space dub record label; the John and Alice Coltrane Foundation; and others. His website is: chamanvision.com.

Also, he curated the Infinite Libraries exhibit at Crewest, in which I exhibited a sound-art work I titled “Re: Selected Holdings from the Instrumental Music Library.”