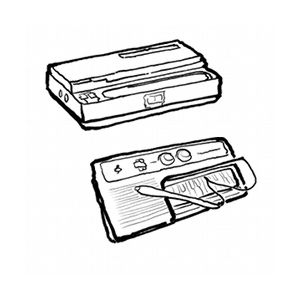 This is the ninth occurrence of a little Disquiet.com project called “Sketches of Sound”: inviting illustrators to sketch something sound-related. I post the drawing as the background of my Twitter account, twitter.com/disquiet, and then share a bit of information about the illustrator back on Disquiet.com. Call it “curating Twitter.”

The above Stylophone drawings were done for me for this project by Natalia Ludmila, who was born in Mexico City and currently resides in Australia, where she is studying toward a Masters in digital design. She has a degree in visual arts from the Universidad Nacional AutÃ³noma de México, in which she specialized in painting. Her work has been exhibited in several solo and group shows in Mexico, Brazil, Spain (and elsewhere in Europe), and Australia. She was the second prize recipient at the XVIII Ibiza Biennale with the dfm e.p project.