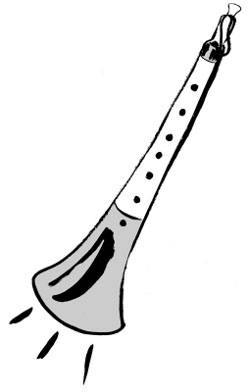 This is the 11th sequential monthly occurrence of a little Disquiet.com project called “Sketches of Sound”: inviting illustrators to sketch something sound-related. I post the drawing as the background of my Twitter account, twitter.com/disquiet, and then share a bit of information about the illustrator back on Disquiet.com. Call it “curating Twitter.”

The above mizmar was drawn for me by Leela Corman. Writes Corman of her object, “It’s a commonly used instrument in Egypt and across the Middle East, Balkans, and Central Asia. In Turkey it’s called the zurna, in some other Arab countries mijwiz, and in other places sorna or sornay.”

Leela Corman is a cartoonist, illustrator, New York native, and professional Egyptian-style dancer. She has illustrated books on subjects ranging from the history of the skirt to urban gardening, has traveled and studied dance in Turkey and Egypt, has performed solo and with many dance companies, and was recently lucky enough to be able to learn and perform two choreographies by the great master Mahmoud Reda, with Ranya Renée and Company. She is currently working on a graphic novel, Unterzakhn, which will be published in 2012 by Schocken/Pantheon, and is the mother of the most fabulous 14-month-old in the universe. More of Corman: art (leelacorman.com), dancing (bellydancewithleela.com), Facebook art and dance, and twitter.com/LeelaOfNewYork

Corman, like several other “Sketches of Sound” participants, contributed to the magazine Pulse! when I edited the comics there.