Tonight is the closing reception for the exhibit Infinite Libraries at the Crewest Gallery in Los Angeles. I have a piece in the exhibit, which was curated by Gustavo Alberto Garcia Vaca. I can’t make it down to LA for the closing, but I was there for the reception on April 4. I posted an announcement in advance of the exhibit (disquiet.com). The show officially ends April 30. Below are some photos I shot at the opening party, and additional information about the exhibit:

Infinite Libraries is based around 14 libraries of Vaca’s invention. He invited about 30 artists (well, about 29 artists plus me) to interpret the libraries, and the show includes prints, photography, painting, sculpture, and several sound pieces. I selected his Library of Instrumental Music as my subject. For my piece, pictured here, I burned a CD with 17 tracks, all MP3s that had, at some point, been uploaded to the Internet by their respective composers, with the intention that they be downloaded: 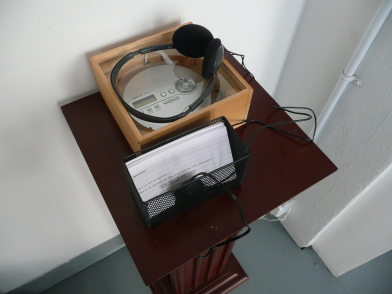 The work consists of a CD player, a pair of headphones, and a small box of index cards. It is titled “Re: Selected Holdings from the Instrumental Music Library.” Each track on the CD is represented by an index card, which details such things as its creator, the bit rate at which it was compressed, and approximate time of its first appearance on the Internet. Each card also includes “tags” that reference the track (things like “downtempo,” “sound art,” “beatcraft,” “ambient,” and so forth), as well as a description. All 17 tracks were derived from the Downstream section of this website, and the musicians featured are: AitÃ¤nna77, Pierre Bastien, Diego Bernal, Charlie Schmidt, allthatfall, Robert Lippock, John Kannenberg, Janek Schaeffer, Christina Kubisch, Jason Kahn, Jel & Odd Nosdam, Raz Mesinai, Darren McClure & Hiroyuki Ura, Family Tapes, the Beets, Craque, and Polina Voronova.

There are two additional cards in the piece. One is instructions (along the lines of what’s described above), and the other is a brief email from a librarian at the Library of Instrumental Music to someone, presumably a young student, who had sent in a request for information. It’s from that email that the piece takes its title (hence the “Re:”). The email provides a fictional context for the collected music. It is dated 2013: 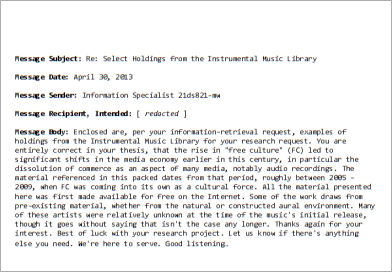 Here are three more views of the piece. The top one was shot from the outside of the gallery. Pictured are a member of Two Rabbits (left — they did live screen printing during the opening; tworabbitsstudios.com) and Man One (right; manone.com), the famed graffiti artist and owner of Crewest: 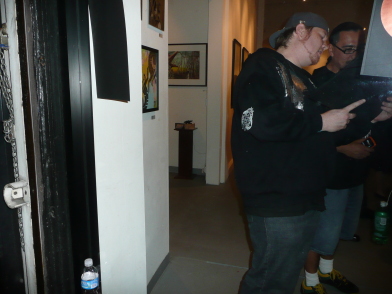 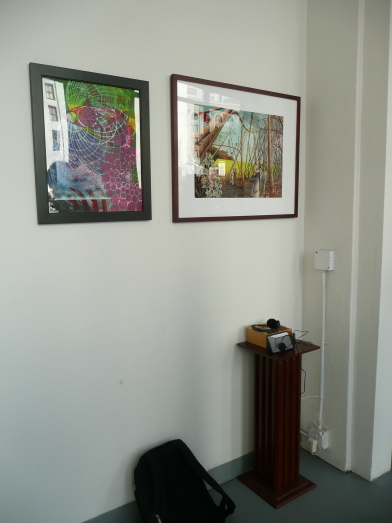 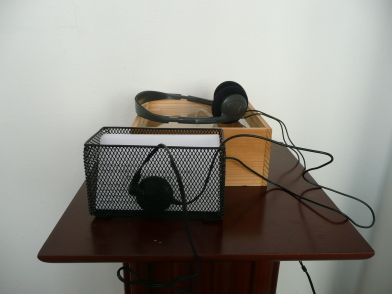 There were two other artists who contributed sound pieces to the show.

Detroit techno musician Jeff Mills created 14 different short sound pieces for his “Infinite Libraries: Galaxies.” He wrote of the work, “Each composition references the 14 conceptual theories of the purpose and future of the libraries.” The tracks are intended to cycle through, and they’re played on a small disassembled stereo that is hidden inside stacks of books. Mills also produced a small number of CDs of the music: 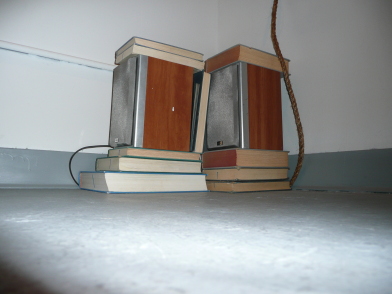 Shane Cooper‘s “The Library of Time: Echo” is an ingenious sound-art interloper. A tall, unassuming pedestal, it records sounds and then plays them back “at the same time and day of the year,” according to his brief description of the piece. This is what it looks like: 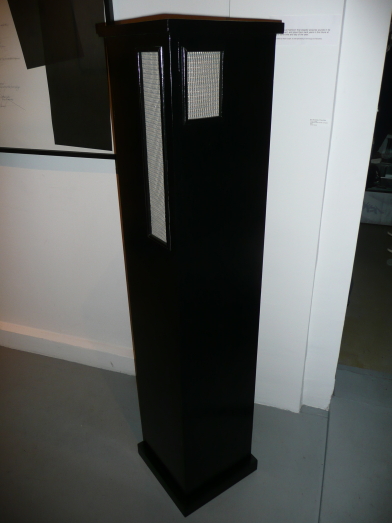 Here’s Vaca doing live painting (far right) alongside Natalie Brechtel, to music by the Shibuya Club DJs (myspace.com/shibuyaclub). The DJs played hip-hop and funk, and toward of the end of the night spun 7″ singles: 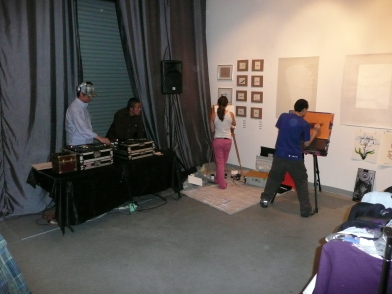 Special thanks to Paul Donald (of branchhome.com), who happened to have the perfect wooden box available when I was working on this project.

There are more photos at the Crewest Gallery’s flickr page, at flickr.com. The photos are by Vic Macias, who is a far better photographer than I am. Here’s one of his shots, showing me (holding microphone) next to Vaca, the show’s curator and inspiration: 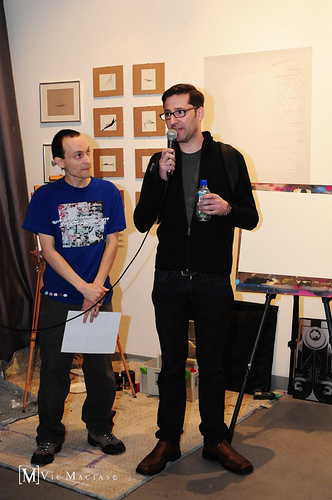 More on the show at crewest.com, and on Vaca at chamanvision.com.