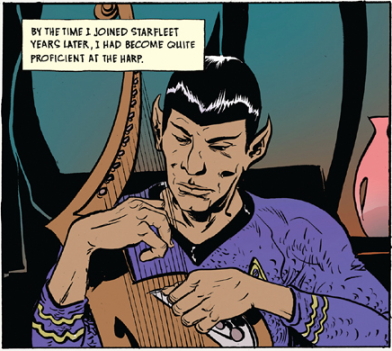 Star Trek‘s Spock, reminiscing in a short comic published in the May 2009 issue of Wired:

By the time I joined Starfleet years later, I had become quite proficient at the harp.

However, I noticed an interesting effect of the music on the human mind. For Vulcans the music was a means of purging emotions by giving them logical, ordered musical forms…

Whereas for humans, the music was a trigger of emotions. I saw otherwise calm and reasoned shipmates become quite animated when exposed to music.

The comic is by Paul Pope and K/O, and the Wired issue was guest edited by JJ Abrams, director of the upcoming new Star Trek film. K/O is a pseudonym for the screenwriters of the new film: Alex Kurtzman and Roberto Orci, both longtime Abrams associates who worked on Alias, Mission: Impossible III, Fringe, and other projects. Read the full comic, six pages in all, at wired.com.