“You have this feeling that it’s” — and the voice cuts out. That’s how the track starts. The sudden cut is more of a truncation than a fade. Had it been the latter, we wouldn’t know for sure if the speaker (so to speak), the interlocutor, had stopped mid-track (so to speak), or if this is the result of an edit. But, clearly, it’s an edit. Clearly for several reasons: the way the sound just ends, the opening up of a vacuum-like sonic space. And, of course, the piece’s title, “Chopped Off the Think.” Also, few tracks on Soundcloud.com, where the file is hosted for free download, have waveforms that look like this one’s, with these bits of sound that end in an instant, followed by extended near-silence, marked by thick singular horizontal bars. 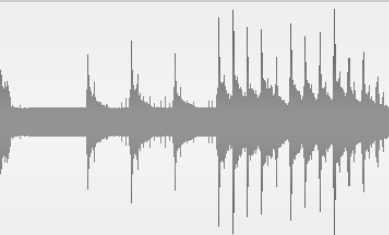 The voice returns: “You don’t know what the” — and it’s fairly certain an f-bomb has been avoided thanks to another quick edit. As the track proceeds, it builds momentum, urgency. The voice seems to be narrating its own editing, as it comments on what does and doesn’t work, and how certain integers seem to correlate with a more pleasing effect. It’s like we’re witnessing the edit (which is credited to all n4tural) as it is enacted.

There’s a unique quality to the human voice — not just this voice, but the human voice in general. It’s a quality that often renders all other sound around it to the background. This track wrestles with the voice by curtailing its presence, limiting its power, focusing our ears on its sound by keeping its message tantalizingly just beyond reach.