From Groove to Rut to Goove 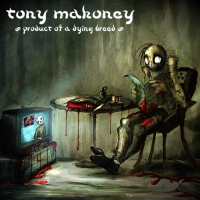 The title of Tony Mahoney‘s recent Dusted Wax free netlabel download, the 11-track Product of a Dying Breed, is a conscious nod to the willfully backdated sound that he pursues. With the exception of a few vocal appearances on the recording, it’s purely instrumental hip-hop, and it’s made from the mix of steady beats and a minimal selection of samples that feels almost primordial in its sparseness. The aged quality is reinforced by how the tracks revel in the light sprinkling of vinyl surface noise that largely disappeared with the rise of digital production. Several pieces stand out, in particular a violin/piano/beats entry that lifts a smidgen of what appears to be Beethoven’s “Für Elise.” The reworking is titled “Broken Wingz,” and it’s to Mahoney’s credit that he manages to slowly erase the listener’s memory of the source material as his rendition proceeds — an especially tricky situation, given how deeply those notes are etched into our musical memories.

The first few times through the track, that opening static seems associated with the lifted source material, but by the fourth or fifth listen, the track has become so solidly Mahoney’s own that the static instead comes to suggest itself merely as the sound of a song about to begin after the needle has touched down.

Nick Lowe once sang, “This rut I am in, it once was a groove.” What beatmakers like Mahoney do is to try to find a new groove in that old rut. And the beauty of the retained static is they take pleasure in that very rut-ness.

Album available at dustedwax.org. Mahoney is based in the UK. More on him at anthonymahoney.blogspot.com and twitter.com/tonyberlusconi. This post is doing double duty as a test of a new audio player. If you have any trouble accessing the track, please let me know. Thanks.