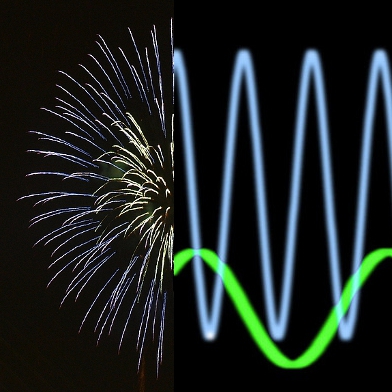 It’s Fourth of July, which in the United States means Independence Day, and fireworks. And as is generally the case in popular culture, the look of fireworks gets far more attention than does the sound. When attending a fireworks presentation, it’s worth considering closing one’s eyes for just one minute and taking in the full breadth of sonic experience, especially to witness live the multi-stage sonic spectacle that is a single firework event unfolding.

Here are two tracks, one of them downloadable, that appear to use field recordings of fireworks as their raw source material (neither, it’s worth noting, is by a musician based in the United States). First up is “Fireworks” by U.K.-based Zama Zama Valentine, who uses the explosion as a downbeat below a sparse, chiming melody. The effect is a bit like hearing carillon bells amid some massive bombardment. Track originally posted at soundcloud.com/zama-zama-valentine.

And while sadly not downloadable, this is “Fireworks” by GunFingers, who is based in France. It’s a real marvel, taking a single explosion and then sending it through numerous processes, each of which retains the original sound but creates something new, including instances of repetition, cut-ups, off-kilter counterpoint, and a deep dubby echo. Track originally posted at soundcloud.com/gunfingers.

(Fireworks portion of the photo-illustration from opencage.info and waveform from flickr.com, both via Creative Commons license.)

2 thoughts on “The Music of Fireworks (MP3)”