There was a nice little scene on the TV show Leverage this past Sunday evening, a rare instance of “silent television.” The episode, titled “The 10 Li’l Grifters Job,” exemplified the playfulness that the series manages to achieve, in part as a counterbalance to the fact that Leverage clearly doesn’t have the biggest budget on television. The show is about a bunch of ex-criminals who take on corrupt big businesses, and it stars Timothy Hutton, who plays Nate, the ringleader, though the real standouts are a thief named Parker (Beth Riesgraf) and a fighter named Eliot (Christian Kane). (The latter’s ability to think, in advance, through a fight like it’s a chess game suggests his creation was maybe influenced by the character Midnighter from the comic series The Authority, which had been written for some time by Warren Ellis, whose series Global Frequency was almost turned into a TV series by Leverage co-creator John Rogers. [Update: apparently this is the case, thanks to a commenter’s citation.])

Anyhow, this past Sunday’s episode of Leverage, written by Geoffrey Thorne, involved a death that occurs during a costume-party murder mystery that is staged at the home of an exceedingly corrupt businessman. At one point, the Timothy Hutton character, who has dressed like Ellery Queen, and Parker, dolled up like Nancy Drew, find themselves at opposite ends of a stairway, needing to get by a guard. They have to remain silent, so they read each other’s lips. There are subtitles for us non-lip readers, but the whole thing already has the feel of a silent movie when a tinkling piano appears in the show’s score to seal the deal — not to mention that the guard is wearing a bowler hat, straight out of a Charlie Chaplin flick. (Hutton playing Queen is an in-joke, because his father, actor Jim Hutton, played the character in the 1970s TV series.) 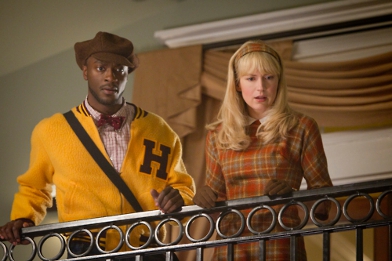 True Grift: The characters Hardison and Parker dressed, respectively, as a Hardy Boy and Nancy Drew in an episode of the series Leverage that briefly flirted with the concept of “silent television”

The sequence is one of the longest wordless non-action/non-sex/non-people-in-labs-with-colorful-test-tubes scenes on television in recent memory. TV musicals, as series and as standalone episodes, have been the rage for some time now, and despite being a huge admirer of the late Dennis Potter (whose The Singing Detective is the ur-text for most fourth-wall-breaking, singing-and-dancing television spectacles), I’d say it’s high time that silent TV episodes had their moment. Being an intimate medium watched generally in the privacy of one’s home, television lends itself to the silent treatment.

What’s sort of funny, as a side note, is that neither Ellery Queen nor Nancy Drew has ever been the subject of silent movie, at least to the best of my knowledge. The two earliest Ellery Queen are streaming online for free and are titled The Spanish Cape Mystery (1935) and The Mandarin Mystery (1936). The first Nancy Drew movie appeared in 1938, more than a decade after The Jazz Singer (1927) popularized the “talkie.”

If the fun Leverage sequence brings to mind the ctheory.net essay on “silent television” by Robert Briggs that I wrote about last September, the quasi-anachronism is straight out of this great xkcd.com webcomic: 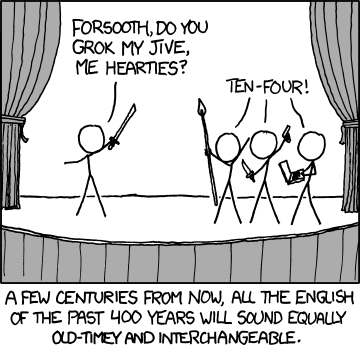 There’s an episode recap for “The 10 Li’l Grifters Job” at tnt.tv, and in the next week the full episode should stream there for free.

Shhh! It’s a Theater: Speaking of silents, as well as of history as viewed through the lens of the present: it’s pretty genius that the San Francisco Silent Film Festival teamed up with the local public library. Read about it at examiner.com. Truth be told, though, this is one of those situations when words in common suggest correlations where they don’t necessarily exist. For one thing, the projectors that played silent movies were notoriously loud. For another, live music performances were part of the experience, and the music was anything but silent, as part of its role was to cover up projector noise. The showings could, reportedly, get pretty rowdy. We only call them “silent” movies in retrospect. It’s an example, as debcha (in a message from her twitter.com/debcha account) recently reminded me, of what is called a “retronym”: Until the introduction of the talkie, silent movies were simply movies, just as until the introduction of the electric guitar, acoustic guitars were simply guitars.