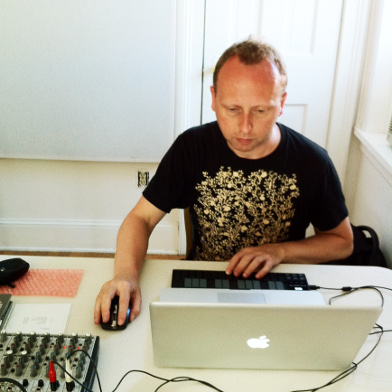 Robin Rimbaud, better known as Scanner, performed a live, fully improvised set earlier this month on the radio at WGXC 90.7-FM in Hudson, New York. It’s an hour long, and varies widely as it proceeds. There’s the mix of stuttered beats and sibilant synthesis at the half-hour mark, pulsing romanticism at the quarter hour, the reflective drone with which the work closes, and that’s just a few of the elements. Particularly memorable is the mix of simulated (or sampled) pizzicato strings and glitch at around 35 minutes in.

The piece is billed as being from “Hands-On Radio,” a rubric that seems especially appropriate to a live solo laptop performance such as this. Turns out, the name is not that of a specific show on which Rimbaud played, but of the radio station as a whole.

The performance does suggest itself as a kind of format: different accomplished musicians performing a solo live improvisation on the air for an hour with only as much equipment as they can carry in a backpack. It would be interesting, week after week, to hear how different artists would handle the assignment, and how audiences would react.

Over on youtube.com, Rimbaud posted this humorous little bit of video, just 37 seconds, that someone shot of him performing. Not inappropriately, it is titled “Dancing Feet”: