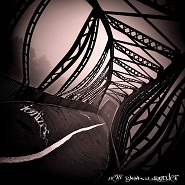 Late last year, the IoNiZeR set Infused Fear made a strong impression with its orchestral samples, its lush beats, and its artisinal dread. It was, in effect, a spy-flick score in search of a deserving spy flick. IoNiZeR characterized that collection, which had seven tracks, as an EP, but refers to his new New Global Disorder, with nine, one of them a remix, as an LP. Either way, the jump from Fear to Disorder, as it were, is an impressive one — in part because despite the continuity of surveillance-chic beats and string-section moodiness, it’s less easily pigeonholed as a would-be thriller score, and in part because those beats and strings are, while still strong, less prevalent.

The latter point is a roundabout way of saying that the transition brings to mind one that Amon Tobin accomplished early in his catalog, when, having perfected the danceable broken beat, he ventured off the drum’n’bass reservation and dove deep into the matters of nuance that respected and rewarded his listeners’ patience. Not that New Global Disorder has gone fully into the realm of the contemporary classical or the avant-electronic. The title cut, for example, sounds like it could serve as the opening credits for a Tom Clancy video game (something Tobin himself has done), but then there’s the hazy murk of “Nothingness,” in which whisps of tension play against echoed strings and various types of subtle percussion (MP3), and “Question Everything,” which not only slows things down further (MP3), but whose title could serve as the ruling dictum for the general sense of investigation that IoNiZeR brings to the whole outing.

Get the full release at dustedwax.org. More on IoNiZeR, who is based in Belgium, at his facebook.com and twitter.com pages.