That Most Minimal of Minimal Technos (MP3) 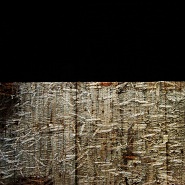 The four tracks that comprise The Nail House of Yang Wu by the Beige Channel have the thorough muffle of the most minimal of minimal technos. It’s like minimal techno heard through a thick wall, which is saying something since minimal techno at its best, circa the Chain Reaction label’s early work, always sounded like techno heard from several floors below street level, filtered through grime (the substance, not the genre), malaise, and urban substructure. (It’s possible that the name Beige Channel is a nod to the influential Chain Reaction act Basic Channel.) Much of Yang Wu sounds like the raw materials of electronic music, scraps of audio set on loop for reflection and consideration, and as a result for display. The fourth and final track, though, is a proper song, at least by minimal techno standards — it’s a single track of remote dub, resembling a delicate clang resounding amid toxic murk (MP3).

The album takes its name from an incident in Hong Kong, when the owners of a small house refused to let it be torn down to make way for a larger construction project. The below photo, which accompanies the Beige Channel album, comes from a 2007 article at atimes.com covering the situation. It provides a helpful visual emblem for the music’s aesthetic, in that the excavation exposes the substructure. 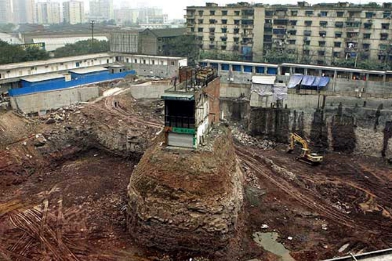 More on Beige Channel, aka Michael Farley, at thebeigechannel.com. Tracks originally posted at the stasisfield.com netlabel.