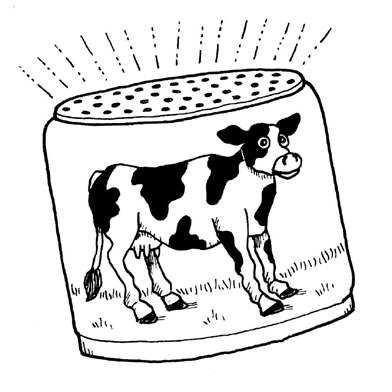 The 17th entry features this drawing by Caesar Meadows, a New Orleans cartoonist who has been self-publishing his own comics for the last 20 years. He’s also had his strips published regularly in a couple of free monthly local magazines, Where Y’at and Antigravity, during this past decade. Since 1999, he’s been reformatting the strips as 1″ x 1.25″ micro-comix which he sells in plastic capsule gumball machines around town. “I also enjoy giving out special edition micro-comix to folks I meet on Mardi Gras day as I marvel and meander in costume through the festive crowds,” says Meadows. He’s been part of on-going jam comic drawing collective called “dafa FUNGUS” since 1998. His latest project is “FEAST yer eyes,” an annual New Orleans illustration and comix newspaper anthology that he edits. The second issue was just published this past July.

I became friends with Caesar during the four years I lived in New Orleans (1999-2003), and I’m very happy to see his line drawing on the site. More on him and his art at jigsawjct.com, feastcomic.com, and twitter.com/jigsawjct.