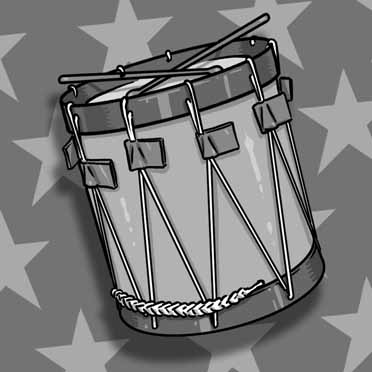 For the 15th entry, in time for the Fourth of July, S.L. Gallant volunteered for service. He writes of the piece:

My late father, Larrie Londin (aka Ralph Gallant), was a studio drummer who started out at Motown with a band called the Headliners, the first white band signed to the V.I.P. label. His r&b sound led him to Nashville, where he backed Dolly Parton, Chet Atkins, and Jerry Reed, and was one of the few to work with Elvis. Later, before his death, he played for Steve Perry, of Journey, and prog rocker Adrian Belew, and for all of them it was his unique drum sound that made him an ideal studio musician. My father loved to accumulate all types of percussion instruments, but snare drums were his favorite. That collection filled the house, and the one I remember most was a colonial-style marching snare that we used as an end table.

S.L. Gallant is a comic illustrator, born in Nashville, now living in Washington, D.C., with his wife, Melissa. It was during his time as an on-staff illustrator in advertising and public relations that he developed the ability to mimic various artistic styles and to meet impossible deadlines. These traits have allowed him to artistically jump between titles such as Titan’s magazine versions of Shrek and Monsters vs. Aliens, to BBC’s Torchwood. Currently, he is the regular artist on IDW’s G.I. Joe: Real American Hero, which continues the original storyline of the classic characters, and is written by the series’ creator, Larry Hama.

More of Gallant’s work can be seen at slgallant.com and his blog, slgallant.wordpress.com.