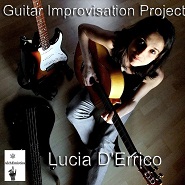 The AlchEmista netlabel, at alchemistica.net, appears to be two netlabels in one. There is the “alfd” line and the “al” line, both of which, as of this writing, have released five separate sets. While both sublabels, or imprints, focus on the guitar, the “alfd” line is varied in its output, including duos, while the “al” line is dedicated strictly to solo improvisations. One impressive recent “al” collection, as of this past February, is a pair of improvs by an aggressive player named Lucia D’Errico, who handles her instrument like a one-woman BBC Radiophonic Workshop. At times, it’s all fuzzed-out sonic weaponry, at others the sonar pings of a fantastic voyage. Rarely if ever does it sound like a guitar is generally thought to sound (which is to say, like other entries in the AlchEmista series), and in addition to various electronic devices, she employs such extended techniques as tapping, scraping the strings to magnify the impact of their texture, and banging on the guitar’s body. One track in particular, “Disco Machine” (MP3), makes evident how D’Errico’s mastery of the noisier aspects of guitar manipulation is in no way a mask for any lesser traditional ability on her part.

Track originally released at alchemistica.net. More on her at luciaderrico.com.