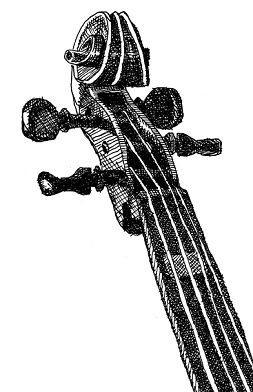 The 16th entry features this drawing by Jesse Baggs. Baggs grew up in Sacramento, California, close to Fulton Avenue, the street used by Robert Crumb as reference for depictions of urban alienation and decay. Unaware of his neighborhood’s deficiencies, Baggs was happily raised on a steady diet of comics and Star Wars. He has created illustrations and designs for a variety of clients, samples of which can be found on his web sites HardPressedInk.com and JesseBaggs.com. His most recent comic, Congressional Caffeine Caucus Catastrophe!, a meditation on politics, religion, and uppers, can be read on his blog.