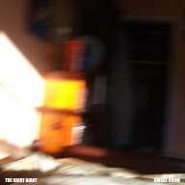 Drone skepticism is understandable. Drones sound similar to each other, like clouds look similar to each other. To discern one drone from another drone is an exercise to some extent. Perhaps that exercise is as meaningful or as meaningless as is the act of distinguishing clouds, or architectural columns, or hemlines, or glasses of a favorite beverage, or anything else that attracts one’s attention. What distinguishes a drone from those other things — for there is, to anyone who focuses on any one of those other things, or any other such things, something that distinguishes them — is that it is unlikely to draw attention. It doesn’t attract attention, the drone. It rewards attention, perhaps even requires attention.

A drone isn’t a song, not in the traditional sense. Perhaps the drone’s title, along with the brief liner note that occasionally accompanies a drone, is its lyric. Is a sad song about a dead friend the same song without the lyric? Is a drone any less meaningful if it gains meaning from the context the drone’s maker provides for it? Is a drone a song without a lyric, or is it a piece of program music, following a narrative that its audience agrees upon, even though it goes unspoken, unsung.

The Hairy Giant’s drone is titled “Awake Room,” which appears to relate to the Giant’s impetus, which is described, in part, as follows:

This rather short piece of ambience creates the atmosphere of just waking up early one morning and catching a burst of orange light pouring through your window from the rising sun. Deep in the distance, the familiar sounds of lawnmowers and yard maintenance lull you back to sleep as you ponder the pleasant day that lay ahead.

This drone, indeed, follows that course. It suggests the sun slowly gaining power. It suggests the buzz of domestic labor. It perhaps even employs sonic artifacts of chores in its raw material — sounds recorded in one’s yard and transformed into art back inside one’s house. “Awake Room” is a thick burr of noise, but a slow one, neither uniform nor momentous. It may tell a story. It may encapsulte memories. It may aspire to describe a state of mind. But it is, first and foremost, a drone.

Track originally posted at archive.org. Discography for the Hairy Giant, reportedly based in New Jersey, at discogs.com.