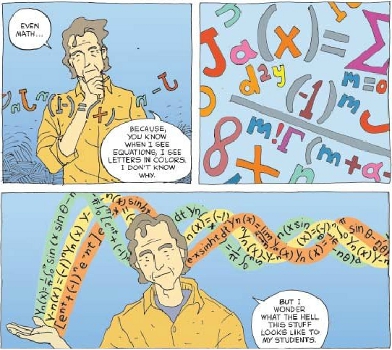 The current issue of Nature, street date September 1, contains my interview with Jim Ottaviani, author of a newly published graphic novel that tells the life story of influential physicist Richard Feynman. The book, titled Feynman, is drawn by Leland Myrick. It’s published by First Second, and came out this past month. It’s full color, and approximately 250 pages long. The interview is behind a paywall (at nature.com), so I hope you’ll pick up a copy, or check it out at your local library. The article explores not only the life and work of the physicist, who is as famed for his bongo playing and his public speaking as for the research that earned him the 1965 Nobel Prize, but what I think of as his posthumous career: the iconification process (a kind of secular beatification) that is steadily making of him something akin to a mix of Albert Einstein and John Lennon. 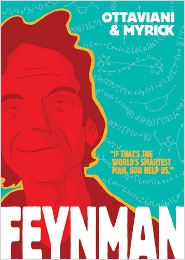 One key element of the Feynman graphic novel’s storytelling is how it emphasizes the synaesthesia inherent in the imagination of its hero. In the interview, Ottaviani talks about the image-centric nature of physics (“Flip through Physical Review: there are a lot of pictures”), and connects that to Feynman’s interest in studying drawing. I didn’t get to mention this in the article, but by a strange coincidence, illustrator Myrick (whose work brings to mind early Ted McKeever) lives in Pasadena, where Feynman was for many years at Caltech.

Read an excerpt of the book at firstsecondbooks.com. More information on the book at macmillan.com. More on Ottaviani, who has written numerous comics about science, at gt-labs.com and on Myrick at lelandmyrick.com.

2 thoughts on “Quantum Synaesthesia: My New Article in Nature”