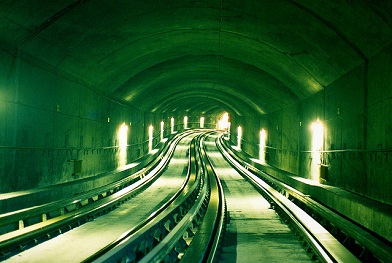 One of the interesting things about the sharing of field recordings is that the audience for these recordings has such a different experience of the recordings from that of the recordist. When Alasdair Pettinger, for example, emerged from the Glasgow tunnel that is the source of his recent soundcloud.com post, he had a personal memory of the original experience. The recording of that experience would both remind him of it, and be unfamiliar, and the gap between those two appreciations would be as much a source of fascination as would be the details in the recording itself. He would, as do we all when revisiting field recordings, listen for what he recalled, and be engaged by what he had not previously noticed.

Pettinger, who records as Bulldozia, describes the incident of the recording as follows:

Pausing mid-way through the foot- and cycle-tunnel under the road tunnel under the Clyde, listening to the cars passing overhead and the gushing of an overflowing drain. Is there a better way to spend a wet Sunday? Recorded 11 September 2011.

He has an apparent fondness for insular spaces, as evidenced by an earlier recording by him mentioned here back in May (“The Sonic Signature of Democracy”). That was the rough yet quiet noise of a voting booth. This time it is the metronome rhythm of a tunnel, its urban pulse evident in those vertical striations of its waveform, shown above.

Track originally posted at soundcloud.com/bulldozia. More on Pettinger/bulldozia at bulldozia.com and twitter.com/bulldozia. (Above tunnel photo via flickr.com and Creative Commons.)