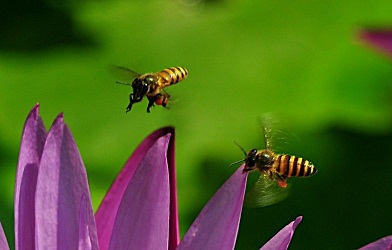 Apostolos Loufopoulos‘s “Bee” has been recognized with an Award of Distinction by this year’s Ars Electronica. It is a thrilling feat of audio imagery, putting the listener on the wings of its title subject. Much of the experience involves the illusion of motion through a three-dimensional space, but it isn’t all fast-passing objects, virtual wind, and the razor flutter of forewings. There is a martial beat that brings another illusion to the fore, the illusion of anthropomorphism (MP3).

We don’t just settle onto the bee’s back for this ride. In Loufopoulos’ telling, we appear to swear allegiance to the Queen and proceed quickly into a state of warfare. There is martial drumming that clearly intends to signal active battle. There are rat-a-tat-tat percussives that may be rooted in the rhythms of wings, but they also bring to mind machine-gun fire. There is a tonal hum that could be the kind of rapid action that presents itself as a mirage of stillness, but it also posits a psychological toll. And then there are hints at orchestral scoring, bringing to mind the big screen WWI and WWII dramas of the past. Loufopoulos’ technical mastery is state-of-the-art, but it works precisely because his allusions and entertainment instincts are splendidly old-school.

Track originally posted at touchradio.org.uk. Loufopoulos maintains a youtube.com presence. More on the composer at his essim.gr page. (Bee photo via itlab.us.)