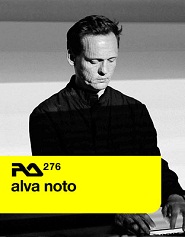 Alva Noto is both the odd figure out, and the compositor of odd figures. In the month of September these roles coincided, as he was both initiating a new art installation at the esteemed Manhattan gallery Pace (under his given name, Carsten Nicolai — thepacegallery.com) and posting an hour-long mix on the dancefloor-friendly website residentadvisor.net. The exhibit features a work for an inflated parachute (see image below). The mix collects two dozen tracks into a purposefully seam-laden whole, one that dispenses with the idea of a steady beat in favor of peculiar congruities, sudden silences, and expanses of stasis. It opens with the locked-groove rigor of Andy Stott’s rarefied “Execution” and proceeds through several of Noto’s own works, and everything from MIA to dance-oriented Boys Noize, somehow working in a bit of Angelo Badalamenti (from the Mulholland Dr. soundtrack) and currently ubiquitous Steve Reich — his pastoral “Reed Phase,” which follows some squelchy Nine Inch Nails, appears briefly on its own, and then settles under the latter-day disco of MMM. 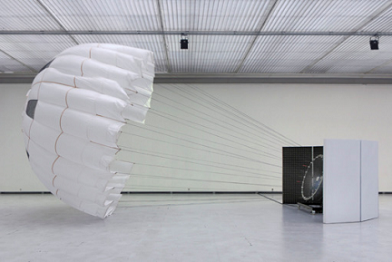