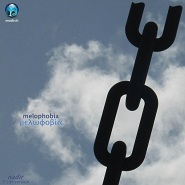 Bird song and voices, rumbles and flanging noise. The first two are discernibly “natural,” discernibly part of the biological environment. That’s a term employed to attempt suggest in a non-judgmental manner a distinction from the built environment. As for the latter two, these deep bass rumbles and that distinct quavering sinusoidal affect, they are seemingly “artificial,” a peculiar (and seemingly self-contradictory) term routinely employed to mean made by a human — but there are many sounds in between them as well, sounds that blur the lines, and help the collection of sounds become a self-contained whole.

The collection is titled Nadir. It’s a single-track release on the netlabel Modisti by the Greek musician who goes by Melophobia. The sounds that blur the line between biological and built are numerous. For example, fast forward to the 17:30 point — are those footsteps or a percussion instrument or an electronic ping? And following immediately thereafter, those soulful male voices: is the echoing a communal call’n’response, or the side effect of the structure in which the singing occured, or perhaps an after effect added by the musician?

More details on the release at modisti.com, where it’s downloadable and streaming, for free.