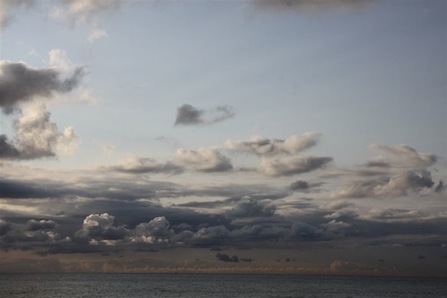 The 70th entry in the ongoing TouchRadio series of podcasts, a side project of the estimable Touch Editions, is from Peter 7 Paelinck, who appears to have taken his somewhat less than enchanted memories of a Norway visit and turned them into something formidable. (Not merely memories, but field recordings: concrete sonic documents of his experience.) Perhaps it is no more formidable than the journey that appears to have eaten at him, but it is certainly entirely more enjoyable, at least by his telling. (“Returning home, the place you love and when you stay too long, you hate, became the source of these recordings,” the brief liner note explains in part.) The mix of field recordings and live instrumentation, which appears to involve some sort of woodwind, perhaps a flure, at times, ranges from solitary and winsome to scraggly and threatening. There appear to be multiple parts, labeled, if the descriptive note can be interpreted as such, “6AM,” “Moonsickness,” “Nobah Sahibs,” “Deadend,” “Nachtmeer,” “Is,” and “23.2” (for example, there’s a clear break at 11:13, and at the 23-minute mark a sudden entry of what could be the dual bass drums of Slayer being imitated by a circus monkey). As a whole the full piece is just under an hour in length, collectively titled “The Home Recordings.” Maybe distance makes the heart grow less fond, because as the track goes on it gets more scroungy and more noisy (MP3).
[audio:http://www.touchshop.org/touchradio/Radio70.mp3|titles=”The Home Recordings”|artists=Peter 7 Paelinck]

Track originally posted at touchradio.org.uk. More on Paelinck at peter7n.be. (The above photograph accompanied the piece on the TouchRadio website, and is credited to Luc Vanhoucke.)