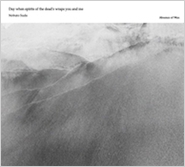 The initial swell comes up quickly. Its brief, rapid rise is so at odds with the languorous, gauzy substance of the overall sound that the effect lingers. There remains a sense of implicit urgency, one that suffuses what otherwise seems like, in essence, the gentle overlaying of the sonic equivalent of passing clouds. The track is “Day When Spirits of the Dead’s Wrap You and Me” by Nobuto Suda, who is based in Kyoto, Japan, and who reportedly builds much of his ambient music from guitar. There is no particular evidence of guitar here: no attack, no bent strings, no instrument-specific texture or technique. What there is is a generous array of complementary sounds, and the occasional appearance of a stray one, like a comet crossing a thick night sky, or a thread of bright and incongruous material in an otherwise dense and nearly homogenous weave (MP3). The sensibility is not without precedent. There is a moment just before the 12-minute point (the piece is just over 14 minutes in length) where it sounds very much like the theme to the original Star Trek TV show.

Track originally posted at the netlabel Absence of Wax, at devinsarno.com/absenceofwax. More on the artist, Suda, at nobutosuda.org, twitter.com/n11s1, and soundcloud.com/nobutosuda1101. One word of warning: the Zip file at Absence of Wax containing the MP3 is 180 megabytes large, a hefty sum for such ethereal sounds; this is because it contains several different versions of the file (versions as in file format, not as in remix). You can also select specific file types for download at archive.org.