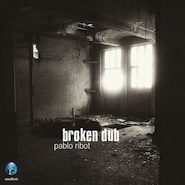 The title is Broken Dub, not Broken Beat. It’s named not for a plentiful if somewhat invisible genre but for a fledgling concept of a potential one (references to “broken beat” outnumber “broken dub” on Google by about 3,740,000 to 61,700). If the idea of a “broken dub” music can be thought to take its cues from “broken beat,” then it’s not surprising that the latter’s mark is heard on the former here, here being the recent Pablo Ribot album by that name on the Modisti netlabel. The strongest track of the album’s seven is titled “Disappointment,” and it’s the one that opens the set. There are broken-beat staples: rhythmic patterns that dissolve amid their own complexity, metrics that fall apart like a tinker toy solider that fatefully misses a staircase step. But there’s more to it: thick and brief piano lines, Bösendorfer thick, that plumb the depths; frazzled fritzes that illuminate the upper regions. Broken beat is the IDM of hip-hop, which is to say it’s concerned with what happens when the backing material is pushed past its functional purpose. To ponder broken dub is to first ponder the purpose of dub.

Track originally posed for free download at modisti.com (the direct download is to a Zip file, hence the absence of a streaming track here). More of Ribot’s music at freemusicarchive.org and soundcloud.com/pablo-ribot.

An earlier Ribot album, Beat Interlocutor, was covered here almost exactly a year ago: “Glitch or Not” (November 23, 2010).