The Hard Ambience of a Cold Day 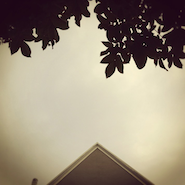 Don’t pry the guitar from Marcus Fischer‘s cold, cold hands. Let him play. Perhaps when he strums that guitar, he isn’t getting quite the precision he desires, but he’s aware of the limitations, fully conscious of them and compensating for them, embracing them. The cold, in turn, reveals itself less as a detriment and more as a filter; the cold serves as a kind of natural dampener, restricting motion. It introduces unexpected sounds and unusual cadences. The best art comes from working within confines, self-imposed and otherwise. Fischer recently shared a track he titled “Guitar Improvisation (With Cold, Cold Hands) at a Room Atop a Tree,” which was taped under circumstances that its title lays bare.

He describes the setting as follows, and presumably the photo that accompanies the track was shot around the time of its recording:

“the days are getting colder again. Â here is a short guitar improvisation i recorded up in my studio as squirrels ran across the branches of our walnut tree busily gathering food for the winter. Â just a simple room recording from my iphone. nothing fancy.”

Shortly after the piece begins, taut strings are balanced by a slowly growing space of foggy reverberation, one that for awhile manages to both nestle the strings and to highlight their sharp quality. Eventually the nestling wins. The piece develops slowly, less a song than a kind of natural progression of sounds. There’s a point toward the end, pretty much for the entire last minute, when the evidence of the guitar strings being struck has, for all intents and purposes, disappeared. The result gives the impression of a loop left on repeat, perhaps one slowly gaining in texture, slowly degrading, thanks to a variety of effects. It’s hard to hear it and to not imagine that the player has taken comfort in the computer’s ability to extend the performance, and he sits nearby, hands in pockets, shivering. (A postscript, on Monday, November 14: When I wrote “computer,” it was a lazy shorthand for “effects.” Fortunately, Fischer provided me, via Twitter, with details about his tool kit: “it was all just guitar and pedals. two loopers, a delay, reverb and fuzz. once again… nothing fancy.”)

Track originally posed at Fischer’s unrecnow.com blog, and hosted at his soundcloud.com/mapmap space. Note that the downloadable version is an M4A, not an MP3.